Puns are a lot like food: too much of either can literally kill you. Luckily, as far as food goes, there exist various diets and portion-control methods which enable you to eat healthy while still satisfying your appetite. Which begs the question: is the same true for puns? Let's find out!

The Other Walter White Meat 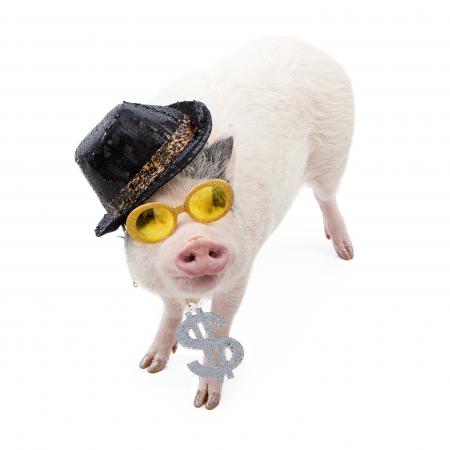 Did you hear that Walter White switched his focus from crystal meth to pork? Apparently, he's Bacon Bad.

It's true. We all felt a little bad for Walter in the series finale as he lay dying by his beloved large vat of methamphetamines. But what if ol' Walt's crime had been limited to black market bacon? All he'd have to worry about then would be a brother-in-law in the FDA, and Jesse getting really, really fat.

But at Least It's Kosher

My old Jewish grandpa started hating his corner deli the minute he heard they were specializing in facacta bread.

We've all been there. You go to your favorite deli with the perfect combination of meats and toppings on your favorite sandwich. But they refuse to serve it on anything but barmbrack bread. And while Jewish delis seldom have menus printed in Yiddish, they do have options like the Morey Amsterdam comprised of sable, lamb tongue, red peppers and cream cheese served on rye.

I went to a fancy party hosted by Mariska Hargitay. The entrees were okay, but nothing beat those delicious Law & Hors d'oeuvres.

In the New York City catering system, particularly fancy parties are handled by an elite culinary squad of party fixers known as the Special Platters Unit. These are their stories.

Organic or Just a Myth?

A new Greek-owned fruit stand just moved into my neighborhood; it's called Jason and the Apricots.

Unlike delis, fruit stands tend not to emphasize the heritage of their owners. Why? Because fruits and veggies come from all over the world and a grape is delicious whether it be from Buenos Aires or Santa Monica. Plus, golden pears beat the Golden Fleece any day.

Cholesterol. Carbohydrates. A Jedi Craves Not these Things. 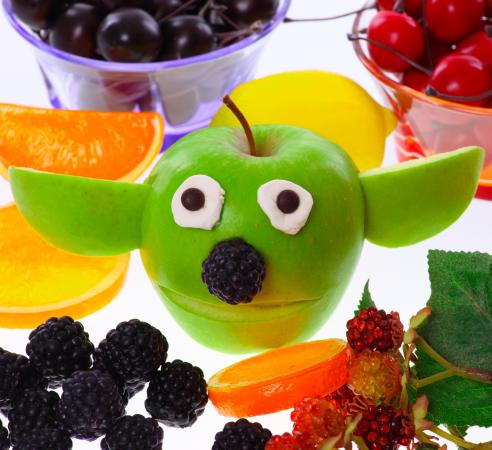 As a very hungry Yoda once said: "Dough or Doughnut, there is no pie."

There was never much discussion regarding the cuisine of the Star Wars universe. Yes, one time Anakan fed Padme a ridiculously CGI'd pear and Harrison Ford "ate" the scenery here and there. But if forced to guess what Yoda ate on an average Tuesday night, it'd likely either be a fictitious, bluish-green nutrient known as "Force vitamin 0-114" or peach pie -- tons of peach pie.

Scarlett O'Hara: As God is my witness, I'll never be hungry again.

Rhett Butler: Frankly my dear, I won't give you spam.

Scarlett was a diva before being a diva was hip. And Rhett was the dapper southern gentleman/war profiteer who loved her. And if something as "common" as spam was even mentioned within the boundaries of Tara… well, they'd both love it and eat it up. They weren't snobs or anything; besides, even the richer plantation owners had to tighten their belts during wartime.

I Scream. You Scream. We All Scream, It's Disgusting.

My siblings and I grew up ridiculously poor. In fact, at the end of each grueling week, our only treat was getting a Lice Cream Sunday.

Why does lice treatment even come in cream form? Isn't the thought of millions of tiny bugs and eggs vacationing on your head gross enough? 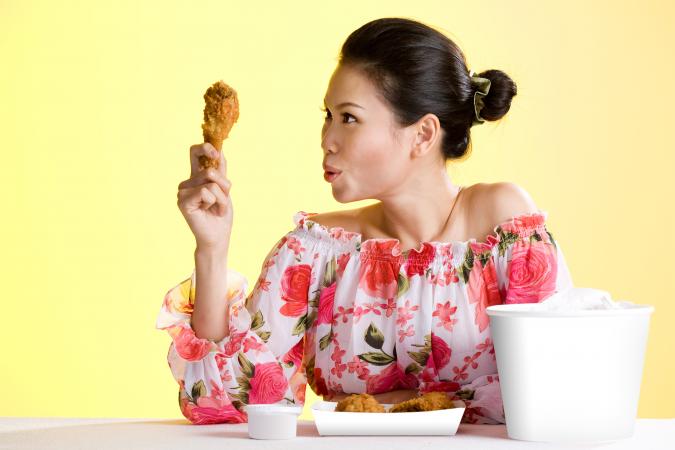 Hear about that new chicken place called Sigmund Fried's? They have the juiciest thighs, breasts and mommy… I mean drumsticks.

Reasons why Sigmund Freud is a much better spokesperson for fried chicken than Colonel Sanders:

32 Flavors and About 6 Million Characters

My favorite ice cream parlor is definitely Game of Cones. (But the books were way better.)

Yes, it's the most popular television show of all time (take that, M*A*S*H), but unlike George Lucas and J.K. Rowling, George R. R. Martin hasn't completely and utterly sold out. Until Jon Snow is on toothpaste tubes and Cersei adorns your brassiere label, A Song of Ice and Fire won't even be close to full saturation of the market. 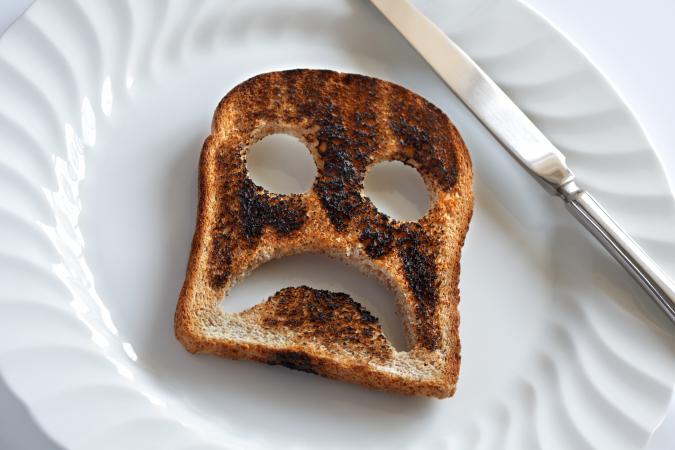 Friend 1: Did you hear about that all-gluten remake?

Friend 2: Do you mean Toastbusters? Yeah, and my childhood is now ruined.

Let's face it. Remakes and reboots are dumb. It's just stupid Hollywood continuously trying to make money off of lightning striking twice --which by the way, it never does. A gluten-free diet, though, that's a fad to set your watches by, folks!

Over 1 Billion Vials of Insulin Sold

Corporations own everything now, even our children's nursery rhymes. And ever since "Old McDonald's® had a Farm," 90% of all kids suffer from type 1 diabetes.

Ray Kroc and his coven of filthy corporate cronies should've been thrown in prison without the possibility of parole years ago for targeting our children. While no other fast foodie will ever be as harmful to American youths as Jared from Subway, normalizing grease, fat and deep fryers as part of everyday life is pretty rotten, too.

Holding Out for a Dietary Hero 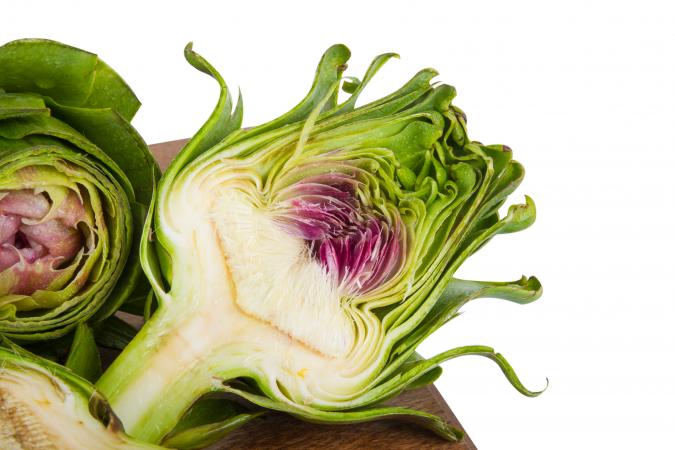 Did you know "Total Eclipse of the Heart" was written by Jim Steinman, the same man who composed most of Meatloaf's greatest hits? And did you further know that the musician in greatest need of a salad is in fact, Marvin Lee Aday, a.k.a. Meatloaf?

No Deflated Cakes Since 2014

The world's best bakers come from the Northeastern United States. They're better known as the New England Pastry-ists.

From the late 1980s to the mid to late 1990s, the New England Patriots were a poor to middling American football squadron. And during those "good old days," the odds of them being the subject of a food pun would've been very unlikely.

And Now, the World's Fanciest Pun

- Beef Bourguignon by what surname?

- Beef Bourguignon by which surname?

- Duck L'Orange by which surname?

Did you know the verb "buttle" means: to serve or act as a butler? It is, in fact, a real word, but one that should never be used under any circumstances.

Q: What do portly vampires drink?

Bela Lugosi's greatest quote: "I never drink… wine," comes from his most memorable film, Dracula (1931). But if you don't want to sit through that old movie, Martin Landau also utters this line as Lugosi in Tim Burton's DocuComedy Ed Wood (1994).

No Seriously, Pardon Me!

Friend 1: I just got a beautiful chocolate Labrador puppy, and I named him Grey.

Friend 2: If he's a chocolate lab, why on earth would you name him Grey?

Grey Poupon used to be the cock of the walk when it came to Dijon mustard. Nowadays, you can get Dijon mustard in any variety through a myriad of different sellers. Thanks, Superstores!

Let Us Stout, It's Cold in Here 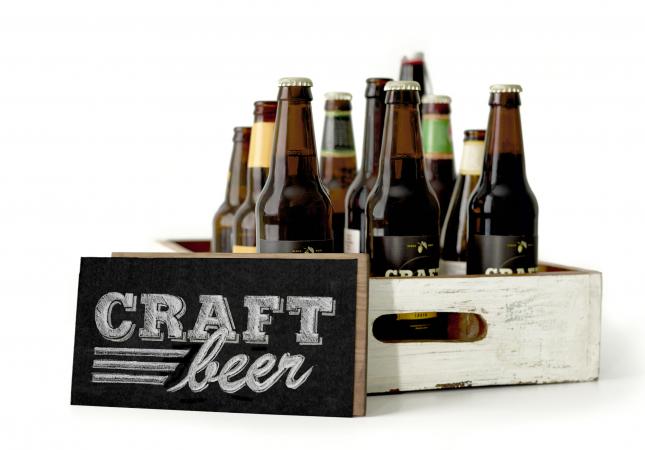 Last night all my adult beverages escaped from the confines of my garage. Yep, they were really crafty beers. And I would've gone out to look for them, but they were also microbrews, extremely hard to locate.

Explain this phenomenon. Whenever you drink a craft beer at a bar or brewery, it's the most delicious thing you're ever tasted in your life, and you'd step on your own mother's neck to get another pint. But when you set up your own brewery in your garage and even print up labels with your face on them, the finished product falls on the taste scale between disgusting and non-drinkable.

If You Liked The Codfather…

Friend 1: Did you ever read that book by famed author and fishmonger, Salmon Rushdie? You know, The Satanic Perches!

Friend 2: The plural of perch is actually perch, you idiot!

Salman Rushdie was saddled with a fatwa, or price on his head, upon publishing "The Satanic Verses" in 1988; a fatwa that is still in effect today. Kind of makes the concept of food puns feel a bit frivolous, doesn't it? Nah, just joking; the Ayatollah Khomeini was a huge jerk and puns are amazing!

So, we've had a lot of fun today learning that a bunch of foods rhyme with a bunch of other things. And while food and puns are both dangerous if not taken in moderation, we as a species couldn't live without them, either. Just remember, next time you're enjoying a delicious gluten-free dessert, you can make a pun about it using The Oregon Trail, Goodyear tires or even 10 Things I Hate About You. Use imagination and you'll never go hungry.