We get it. Laws against murder, theft, and other criminal activity protect our society from complete chaos and anarchy. But there are some ridiculous decrees, especially when it comes to food, that leave us scratching our heads and saying, "You've got to be kidding me!" In West Virginia, for instance, there is a law that actually legalizes roadkill cuisine. Mm, mm! Nothing like bringing your wife and kids a dead skunk for dinner! But the absurdity doesn't stop there.

1. It's Illegal to Eat Dead Frogs From Frog-Jumping Contests in California 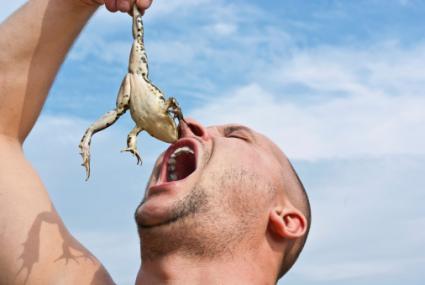 2. Having a Potluck in Arizona May Land You in Jail 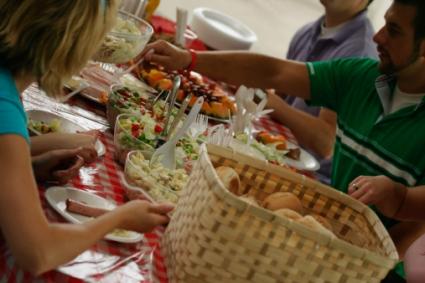 Potlucks seem innocent enough, right? Your aunt swings by with some coleslaw, your uncle saunters over with tuna casserole, and your cousins bring a batch of chocolate chip cookies. But beware, because according to the Huffington Post and the Havasu News, if held outside of the workplace, potlucks are punishable by law. Should any of your nosy, envious neighbors complain about your little gathering to the authorities, you could find yourself in the slammer.

3. A Pickle Ain't a Pickle Til It Bounces in Connecticut

Connecticut has been saving its citizens from pickles that do not bounce for nearly 70 years. Heroic, isn't it? It all goes back to 1948 when Sidney Sparer and Moses Dexler were in a pickle (pun very much intended) for selling pickles that were "unfit for consumption," according to CONNector. Connecticut Food and Drug Commissioner Frederick Holcomb said that one of the ways you can check a pickle's freshness is by bouncing it. As you might have guessed, the pickles in question failed the test and Sparer was slapped with a $500 fine.

4. Throwing Out Food Is Illegal in Seattle, Washington 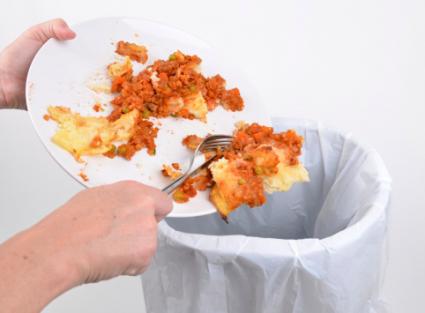 If you live in Seattle, you may want to think twice before throwing out that unfinished sandwich into the trash! According to NPR, due to an ordinance implemented last year, tossing food into your bin will get you fined. Violators will get slapped with a $1 fine. The law was put in place to coerce citizens to start composting.

5. It's Illegal to Eat Watermelon in Parks in Beech Grove, Illinois 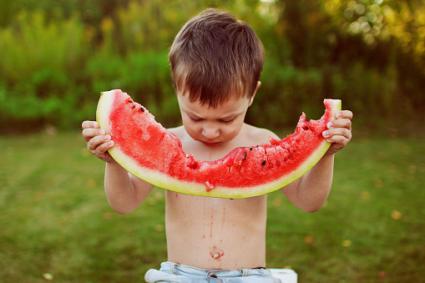 They're delicious, juicy, and refreshing. What could Beech Grove possibly have against watermelons? Legend says the repulsion began after a bunch of watermelon rinds punctured garbage bags in the park, leaving a sprawling mess. Ever since, Beech Grove has banned the tasty, green fruits from ever seeing the light of day at a park.

6. You Cannot Serve Refreshments at Funeral Homes in Massachusetts

From one standpoint, Massachusetts's ban on food in funeral homes makes total sense. The aromatic, sweet-smelling scent of fresh-baked cupcakes and brownies would surely jolt the corpse awake. And no one would want to be around to see that!

7. Honking at a Sandwich Shop Is Illegal in Little Rock, Arkansas

Blaring your car horn near any place that sells cold cut sandwiches is prohibited in Little Rock, Arkansas. It makes you wonder, doesn't it? What on earth could have galvanized the enactment of this odd city ordinance? Did a gaggle of evil-minded pranksters once crowd a sandwich shop to honk their horns relentlessly? Do the sandwiches taste better when car honking is absent from the atmosphere? Who knows, but it's a law, according to the DMV, and it must be observed.

These laws might seem a little preposterous and unnecessary, but there's often a method to lawmakers' madness. Perhaps funeral refreshments and watermelon rinds truly are a menace to society and need to be kept at bay after all?