Frozen water is no big deal, right? It's only used to make majestic ice hotels in Quebec, Norway, Finland, and Slovenia every year. If your architectural skills aren't quite up to snuff and you're not so ambitious, you can still keep cool in the coolest ways possible by hacking through summer with your ice cubes and ice cube trays. It's time to chill out. 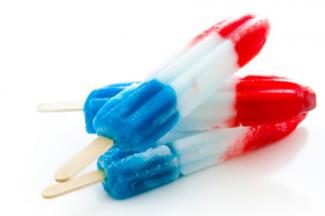 A favorite summer treat among many kids is the red, white, and blue popsicle known as the Rocket Pop or Firecracker. Exercise your American patriotism (or allegiance to the French, apparently) by mimicking the look using frozen milk.

Using an ice cube tray (or a popsicle tray depending on your desired shape), freeze milk with food coloring in layers. Start with red at the base, add uncolored white milk in the middle, and top it off with blue milk. Just make sure to let each layer freeze before adding the next. You can even use frozen yogurt instead if you prefer. Toss these on top of milkshakes and other frozen desserts for an extra creamy kick of awesome. 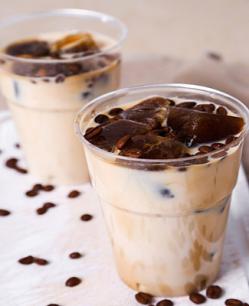 Suffering through another dreadful case of the Mondays? Struggling to get through the midday blahs? Downing a piping hot cup of joe when it's scorching outside probably doesn't sound all that appealing... unless you're using your profuse sweating as a weight loss technique.

Iced coffee may be a terribly attractive alternative, but it can quickly become watered down with regular ice cubes. Swap that for frozen coffee and you won't have to endure the dilution blues. Want to get even fancier? Freeze milk with vanilla extract along with your frozen coffee cubes and throw those into your cup of cold brew. It's almost like a more convenient affogato.

3. Lime and Mint: the Perfect Blueprint

The biggest problem with regular old ice cubes is that they are just frozen water. And water has no flavor. And no flavor can be awfully boring. Making a mojito? Freeze some lime and muddled mint leaves (along with water, of course) ahead of time to kick that flavor profile up a notch.

Hosting a party and don't want to bother with individual drinks? Go big even when you go home. Skip the regular ice cube tray and fill up a muffin tray with the same lime and mint concoction. You get mega-sized blocks of flavored ice for your pitcher. The bigger blocks don't melt as quickly either. 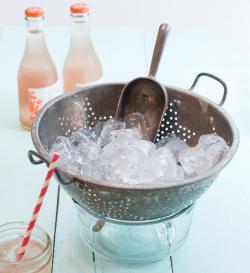 Colander used as an ice bucket

Summer backyard barbecues are the best. The burgers are on the grill, the kids are playing in the yard, and the mosquito army is out in full force with their collective efforts seemingly focused entirely on your exposed pinky toe. You reach to grab a drink and find that the ice bucket has been reduced to a pool of icy water.

What kind of host are you, anyway? Keep your ice cubes in a colander inside of another bowl. When your guests want to get some ice for their chilly beverages, they don't have to fish around like they're bobbing for apples. That's a Halloween activity.

5. The Beauty of Cucumber and Honey 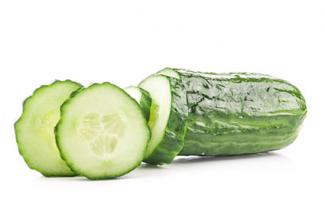 They say beauty is in the eye of the beholder. If you're feeling a little more beastly and a little less Belle, you can chill that icy cold stare with the help of some cucumber and honey ice cubes. The cucumber is cooling and the honey can moisturize, resulting in glowing skin without having to be possessed by some ethereal spirit.

Blend a chopped cucumber with three tablespoons of honey and half a cup of water into a thick puree. Pour the mixture into an ice cube tray for freezing. Perfect for a morning treatment after an obvious lack of proper rest, these magical green cubes can shrink pores, help to clear skin, and reduce puffiness. Use liberally in conjunction with the full strength iced coffee recipe above to ready yourself for the day ahead.

How Cool Is That?

Regular ice cubes and ice cube trays can be remarkably versatile if you allow for a little creativity. Make some watermelon (and vodka!) ice cubes for a particularly refreshing variation on your favorite summer cocktail. Crunch on some ice cubes as a means of shocking your body awake in the morning. Let loose and be free! This summer, it's time to break the ice.